Russian President Vladimir Putin’s goal in his war in Ukraine is nothing less than eliminating the country, according to an expatriate Russian-American journalist who spoke at Arizona State University on Monday night.

“He’s not going to stop. I don’t expect the negotiations to come to anything,” said Masha Gessen, an author and staff writer for the New Yorker who covers Russia and Putin.

“The best-case scenario is some kind of temporary partition that Putin agrees to because they’ve run out of resources, but that will be time he takes to regroup and attack again.

“The worse case would be chemical (weapons), which appear to have happened already, and the use of nukes.”

Gessen was the speaker at the John P. Frank Memorial Lecture at ASU, co-sponsored by the School of Social Transformation, Center for the Study of Religion and Conflict and Arizona Humanities. Karen Frank, daughter of John Frank, a lawyer and constitutional scholar and historian, said that Gessen “has been a truth-teller at great personal risk.”

Gessen, who uses they/them pronouns and fled Russia in 2013, has been surprised at Ukraine’s resistance to Russia’s invasion.

“I interviewed people in Ukraine who said, ‘We have the best trained military in Europe because we’ve been trying to join NATO so we brought everything up to NATO expectations,’” they said.

“It appears that was true. But it’s also just the incredible courage and resilience of the Ukrainian people. People coming out to protest in the occupied cities — that gives me chills.”

Gessen said that Putin’s aggression in Ukraine amounts to genocide.

“I use the word very advisedly because Russia has made it clear that the goal of the war is to make the Ukrainian nation not exist,” Gessen said.

Gessen wrote a book, “The Man Without a Face: The Unlikely Rise of Vladimir Putin,” about the Russian president’s rise to power despite not being very smart or skilled.

“Putin was truly an accidental president,” whose ascent was engineered by former Russian President Boris Yeltsin, they said.

“Yeltsin thought that Putin was such a nothing that he would be infinitely controllable. They could manipulate him. They made a mistake.” 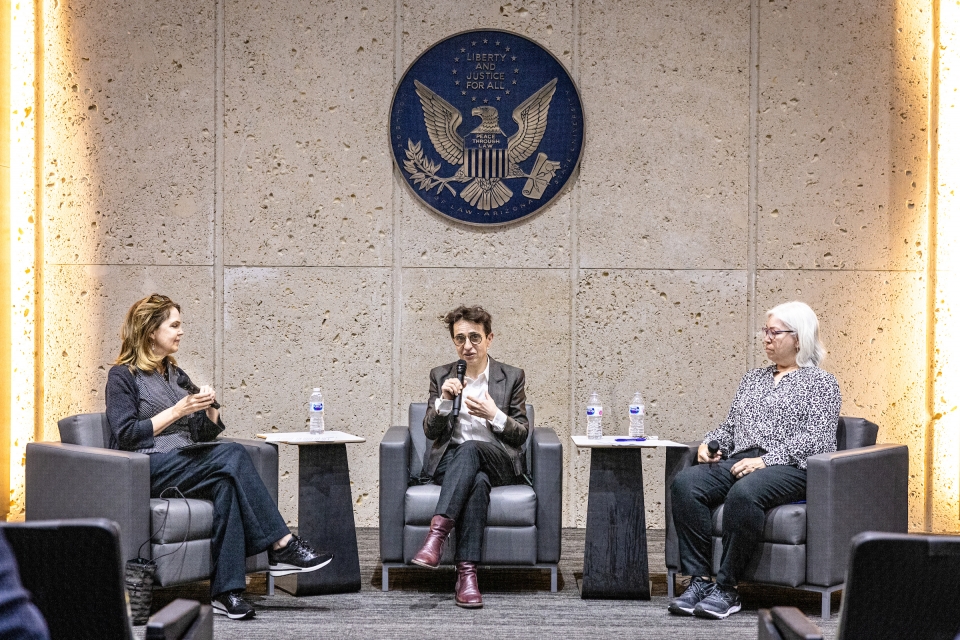 Russian American journalist, author and activist Masha Gessen delivered the 2022 John P. Frank Annual Memorial Lecture on Monday in Armstrong Hall on the Tempe campus. Gessen's talk was moderated by Tracy Fessenden (left), the Steve and Margaret Forster Professor in the School of Historical, Philosophical and Religious Studies and director of strategic initiatives in the Center for the Study of Religion and Conflict, and Madelaine Adelman, professor of justice and social inquiry in the School of Social Transformation. Photo by Charlie Leight/ASU News

All autocratic politicians exploit peoples’ fears by promising a return to the past, including Putin, Gessen said.

“There’s always a story the autocrat is telling that plays into people’s anxiety about the future, how fast things are going, how they can’t imagine themselves and their kids in the world that will exist 10 or 15 years from now.

“Along comes the autocrat, who says, ‘I can take you back to the past when you were comfortable, when you knew who you were and you felt stable.’

“People will give up their freedom in exchange for being promised stability and comfort and a return to an imaginary past.”

Putin has portrayed Ukraine as a symbol of the West that wants to force its values down Russia’s throat, including acceptance of LGBTQ people, Gessen said.

“In order to show that they mean it, but also to symbolize this reversal of social change, (autocrats) have to go for what was the fastest and most visible social change, and in much of the world, it was advancing LGBTQ rights,” they said.

“(Putin) used the image of LGBTQ people to symbolize the West and rapid social change. It was, ‘Don’t you want to go back to a time when there were no queer people and you weren’t expected to accept them?’”

“Among his first acts was the travel ban and then the ban on trans people in the military,” they said.

“There’s a real grievance narrative that is dominant in this movement. It’s demographic panic. For most of them, they realize it’s obscene to talk about race so they place their resentment on LGBTQ people.”