Destined for the district

Editor's note: This story is part of a series of profiles of notable spring 2021 graduates.

Even over Zoom, Arizona State University graduate Cameron Vega’s poise and professionalism is notable. Like many students this year, he has had some practice using the virtual platform. Just as his semester interning for the U.S. Department of State in Washington, D.C., was getting underway in the spring of 2020, the pandemic hit.

Vega ended up returning to his home state of Arizona to finish out the internship online, but it took some convincing. Ever since his first visit to Washington as an adult, in the summer of 2018 when he flew out to represent the Alexander Hamilton Society as incoming president at a conference, he was hooked.

“I kind of knew I found where I wanted my home to be on the flight in, where the plane does a little turnaround at the Washington Monument,” Vega said. “I was stunned by that. I knew that these were the sites I wanted to see for the rest of my life.”

But the School of Civic and Economic Thought and Leadership Dean’s Medalist didn’t always know he was destined for a career in the district. He started his freshman year at ASU as a physics major. It was a last-minute decision to take part in the Model United Nations Conference that changed his trajectory forever.

Today, Vega is looking back on an academic career that includes three fellowships (one each with ASU’s Center for the Study of Religion and Conflict, Center on the Future of War and Melikian Center for Russian, Eurasian and East European Studies), a National Merit Scholarship, a National Hispanic Scholarship and a George Washington Scholarship.

And the accolades don’t appear to be stopping any time soon. This March, Vega received word that he had been accepted to Johns Hopkins University for graduate studies with a full ride, thanks to a well-earned Pickering Fellowship. He plans to pursue a master of arts in international relations, after which he will join the U.S. foreign service for five years.

ASU Now spoke with Vega about how he got to where he is today, and how others can get there, too. 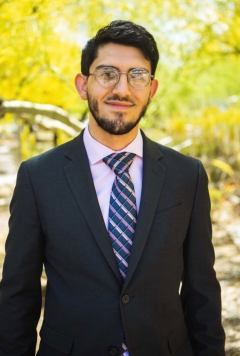 Question: You double majored in political science as well as civic and economic thought and leadership. What was your “aha” moment when you realized you wanted to study those fields?

Answer: I actually started out as a physics major, but before the start of the fall semester freshman year, I participated in the Model United Nations Conference for the very first time. I participated in the conference because I had enjoyed playing computer games like “Civilization” and had developed an interest in the role of foreign policy and how it relates to interpersonal communication and understandings. So after the conference, I was drawn to political science as a broad field. Then, while I was taking a political ideologies class, we read a couple excerpts from texts such as Machiavelli's “The Prince” and Thomas Hobbes’ “Leviathan.” And for me, reading those excerpts really didn't capture the full picture. But I noticed that in my SCETL classes, which I took on the recommendation of a few peers, that they really did approach the whole texts and look for not just the individual context, but the context of the text as a whole and the historical context which was developed. And I found that it really complimented my political science degree and ended up becoming more of my focus than political science was.

Q: Why did you choose ASU?

A: For me it was a matter of cost effectiveness knowing that I’d be pursuing a graduate degree later. I wanted to make sure that I wasn't going to be in debt beforehand. And the offer from Barrett as a National Hispanic Scholar was too good to pass up. I was also very attracted to the general environment of the honors college, which is like a sort of competitive community on campus that I knew would allow me to engage with students in my own majors but also across disciplines. I thought it was really important to be able to talk with everyone from engineering students to aspiring mathematicians to theater kids who all just have this drive and passion to succeed. Plus, my family is a bunch of Sun Devils, so they were happy to support me going to ASU.

Q: What’s something you learned while at ASU — in the classroom or otherwise — that surprised you or changed your perspective?

A: Just about how many opportunities are out there. Being from Arizona and wanting to be in D.C. means that I took every opportunity I could to try and get over there to the East Coast and level the playing field between me and some of my East Coast peers and colleagues that I'd be competing with for careers and graduate school positions. And for me, that meant going online, parsing through jobs and internship listings, parsing through conference listings and seeing what I could apply to and what was realistic for me. And ASU was a big help with that; receiving institutional support from the School of Civic and Economic Thought and Leadership as well as from the School of Politics and Global Studies was critical for me getting my foot in the door. Same thing with student organizations at ASU. There were some fairly well-renowned foreign policy organizations that I was able to become a part of and rise through the ranks of, officer-wise. Being able to utilize those positions to get myself over to D.C., despite being all the way from Arizona, really allowed me to succeed in my undergraduate career.

Q: Which professor taught you the most important lesson while at ASU?

A: It's really hard to pick a specific professor because different professors have guided me in very different ways. The professor who kicked things off for me was Dr. Paul Carrese, the current director of the School of Civic and Economic Thought and Leadership. He was the former adviser for the Alexander Hamilton Society. I took his course on statesmanship and American grand strategy, and he had a lot of faith in me and nominated me for a couple of summer opportunities. And although I didn’t receive them that year, the next year I received just about every opportunity I applied for with institutional backing from the Alexander Hamilton Society and SCETL. So that really kicked me off and gave me the vote of confidence that I needed. Other people that I would like to mention are Dr. Karen Taliaferro, who has been very kind and helpful with professional advice, as well as allowing me to just sort of dive into texts that I really want to. As well as Drs. Carol and Peter McNamara.

Q: What’s the best piece of advice you’d give to those still in school?

A: Look for opportunities to pursue leadership positions in student organizations, but make sure you can handle them; make sure you can commit to them. I've seen some students before, including myself, who get burned out by overcommitting. But look for opportunities, especially for leadership, because they allow you to stand out among a huge undergraduate class when you’re applying for scholarships, fellowships, graduate schools and careers. And don’t be afraid to take some chances and maybe sit in on a class and see if it sparks an interest, especially early on as a freshman or sophomore. If I hadn't attended the Model UN Conference, I would probably still be doing physics right now, and there’s no way I’d be the dean’s medalist for physics. Finally, utilize the Office of National Scholarship Advisement. It’s a really great resource on campus that is underutilized. Quite often, students who would easily qualify for a scholarship or fellowship just don't know about them, and they can let you know what you’re qualified for or offer suggestions on how to improve.

Q: What was your favorite spot on campus, whether for studying, meeting friends or just thinking about life?

A: If you're unfamiliar with your roommates, your common areas are really important. I also met a lot of my friends through classes, and although I didn't have specific favorite spots, events on campus were also a really good way to branch out and get to know people. Subscribe to newsletters and keep an eye on SunDevilSync to keep up with what’s happening.

Q: What are your plans after graduation?

A: I'll be attending Johns Hopkins University for graduate studies. I just got my acceptance in the mail, and I've received a full ride, thanks to my Pickering Fellowship. I’ll be there to pursue a master of arts in international relations. The fellowship program provides support for graduate school for two years, and in exchange, I join the foreign service for five years after graduation.

Q: If someone gave you $40 million to solve one problem on our planet, what would you tackle?

A: I think that that money should be put toward equitable structures in America. Whether that be police reform or testing out a universal, basic income or offering greater educational opportunities for those in lower income brackets.