Editor's note: This story is being highlighted in ASU Now's year in review. Read more top stories from 2019.

Shiv Shah is a scientist first and foremost. And he looks every bit the part, clad in a white coat, seated behind a microscope, peering through the lens at a slide in a lab at Interdisciplinary Science and Technology Building I on Arizona State University’s Tempe campus.

His love for the field is why he decided to major in biological sciences through The College of Liberal Arts and Sciences. But he has other interests, too. Shah is also minoring in economics, something that might not go as smoothly elsewhere.

Lizbeth Meneses was less sure about where she wanted to focus her studies when she came to ASU. Originally, she had chosen justice studies as her major. But after participating in The College of Liberal Arts and Sciences Early Start program, a free, two-week immersive experience that allows students to tour campus and meet with faculty before classes begin, she reconsidered and went with psychology.

Like Shah, Meneses also has other interests, specifically history. So she added that as a minor and is just as appreciative of the opportunity to explore more than one area of interest at the same time.

“I like how I'm able to do a lot of things and still focus on my main interest,” she said. 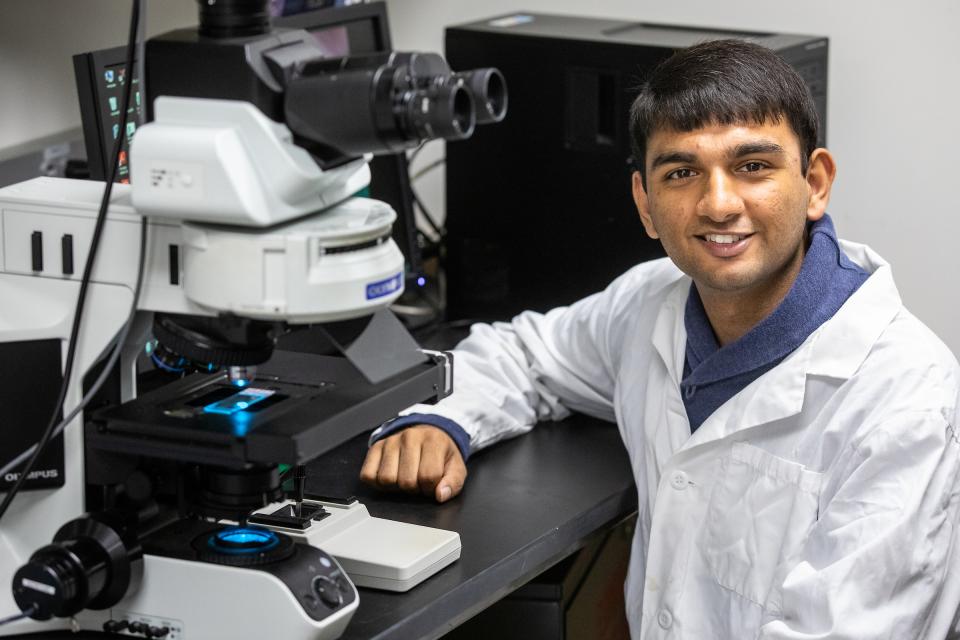 Biology senior Shiv Shah began working in the neuroscience research lab at ASU while he was a senior at Hamilton High School in Chandler. He’s currently working on a project that looks into developmental ailments such as autism and is applying to medical schools where he may continue his neurological research and combine it with patient care. Photo by Charlie Leight/ASU Now

The experiences of Shah and Meneses are an apt reflection of the mission of The College of Liberal Arts and Sciences, said Dean Patrick Kenney, who called it the “academic heart” of the university.

“(We want to) deliver graduates who have a very broad education in the arts, in the sciences, in the humanities and the social sciences,” Kenney said. “People have believed for a long time that that a balanced education will help not only general society, as people come out with a broader view of what the world looks like, but also help them in their careers … ”

The College of Liberal Arts and Sciences acts as a foundation, he added, from which students can add subjects to their academic pursuits.

On Wednesday afternoon, that idea was reinforced by an event at Armstrong Hall to announce the rebranding of The College of Liberal Arts and Sciences from its former acronym “CLAS” to its new informal title of “The College.”

“At the heart of Arizona State University is the College of Liberal Arts and Sciences, in its historic name, which is all those things that you would think of — history, philosophy, political science, chemistry, physics, English — the core disciplines of the university,” ASU President Michael Crow said in a previously recorded interview. “The core of the core of the core. And so that is The College; it’s the core of the institution.

“The rebranding is just to have a simple, focused name. We get a lot of people out there that get confused with, what is a liberal art (or science)? … There’s little understanding of what the capital “L” liberal means. The whole notion of … a liberal education being one which is guided by reason, guided by logic, guided by elements that go beyond the temporal or the physical. … We just think that ASU should have The College, the place that’s the core of the university, where the heart of what universities are about is taught and advanced.” 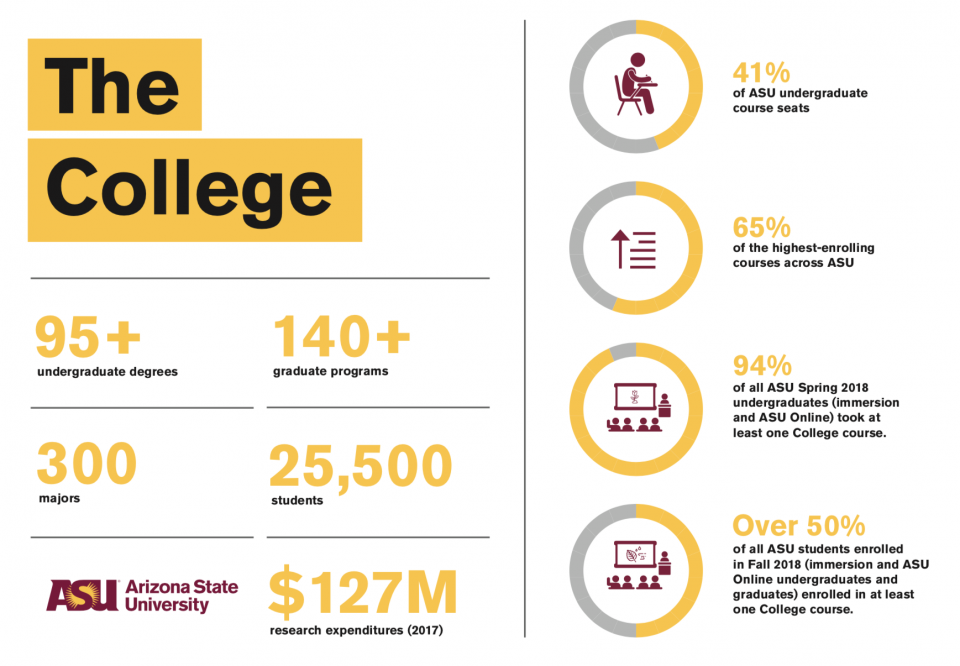 Today, The College offers more than 95 undergraduate degrees and 140-plus graduate programs, and boasts 25,500 students. While such growth is generally a good thing, it led to a less-than-ideal spatial situation in which The College eventually found itself spread out over 40-some buildings across the Tempe campus.

In an attempt to bring it all together and establish a cohesive identity for ASU’s liberal arts and sciences students, The College secured a new home base at Armstrong Hall last May. The freshly renovated 98,000-plus-square-foot building on the southeast edge of ASU’s Tempe campus includes:

• Nearly 46,000 square feet of space for academic advising and services focused entirely on student success, including The Futures Center — a project built in partnership with ASU’s office of Career and Professional Development Services as a 21st-century career center for liberal arts and science majors.

• Two levels of student study space staffed by ASU Library and open after-hours from 5 to 10 p.m., Sunday through Thursday, where students will have access to an active learning classroom, group study rooms, event space and academic support from an ASU librarian.
Video of The College of Liberal Arts and Sciences: Academic heart of the university

Video by The College of Liberal Arts and Sciences

In addition to its size, The College has come to be known for its excellence. It is a top producer of the world’s most elite students, such as Boren, Gates Cambridge, Goldwater, Marshall, Truman and Udall scholars; its faculty includes three Nobel laureates, 28 Guggenheim Fellows, 91 Fulbright American Scholars and three MacArthur Fellows; and in 2018, it reported $140 million in research expenditures.

Opportunities for research at The College range in subject from STEM to the humanities, often cross traditional disciplinary lines and are available even to undergraduates.

Shah began conducting research while he was still in high school in School of Life Sciences Assistant Professor Jason Newbern’s lab. There, he studies the pathological mechanisms of neurodevelopmental conditions in the hopes of helping to identify targets for therapeutic drugs.

Meneses has been conducting research under the guidance of School of Historical, Philosophical and Religious Studies Assistant Professor Volker Benkert since her first semester at ASU. She has taken on a couple of projects: one that explores the history of the Beth Hebrew Synagogue in Phoenix as a resource for a variety of minority communities over time; and, under the Center for the Study of Religion and Conflict’s Undergraduate Research Fellow’s Program, one that examines the psychological dispositions of ordinary Germans as tacit accomplices, beneficiaries and sometimes perpetrators in the Holocaust.

“(Lizbeth) epitomizes a kind of student that only ASU can produce: She is grounded in her major, but always open to interdisciplinary approaches,” Benkert said. 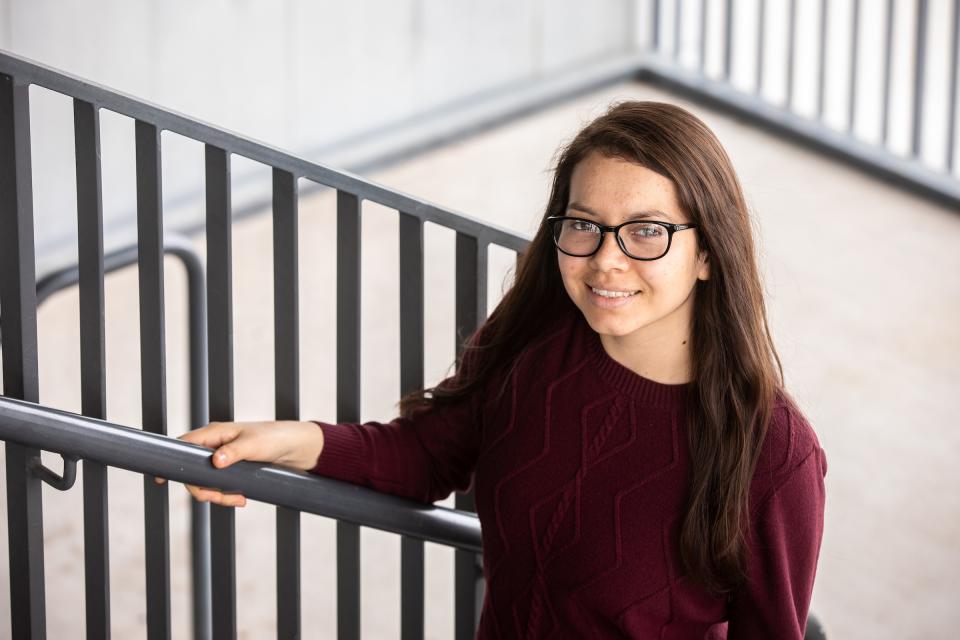 Psychology sophomore Lizbeth Meneses is researching, in her free time, how the German populace from 1933–38 became complicit with the Nazis and their push to exterminate the Jewish population. Unlike most of her peers, who start to do independent research in their junior year, Meneses started working with a faculty research adviser as a freshman and won two grants to continue her study. Photo by Charlie Leight/ASU Now

In the years to come, Kenney sees The College as central to ASU’s mission of access, with a diverse student body that is more representative of the population of the community it serves — roughly 40 percent students of color, about 40 percent of whom are Pell Grant eligible; roughly 30 percent of first-generation students, about two-thirds of whom are students of color; and about 55 percent of students who are women — and a burgeoning suite of online offerings: Twenty-six undergraduate degree programs and 12 graduate degree programs are now available online.

Kenney summed it up thusly: “The access mission doesn't work if The College isn’t successful.”

Top photo: The College of Liberal Arts and Sciences administration moved to its new home in the renovated home in Armstrong Hall in May 2018. Photo by Charlie Leight/ASU Now