In the summer of 2002, when Michael Crow became president of Arizona State University, he set about restructuring the university in a way that eschewed the traditional siloing of educational departments and emphasized cross-disciplinary collaboration and inquiry.

One of Crow’s first major presidential moves was the establishment of more than a dozen new transdisciplinary schools and large-scale research initiatives — including the Center for the Study of Religion and Conflict in 2003.

As the world continued to reel from the events of Sept. 11, Crow had a sense, according to a 2011 interview with the center’s founding director, Linell Cady, “that questions of religion and conflict were hugely important and that there were enormous resources at ASU to deal with them.”

Too many to limit to just one discipline.

“To really understand an issue, we’ve got to look at it from a number of different angles, and we need places, research centers like this one, where we can do that,” said John Carlson, the center's interim director.

“And if you have religious scholars in one room and science scholars in another room, and they don’t talk to each other, you’re probably having some really anemic conversations and stultifying conclusions. Because you simply don’t have the aperture open very wide.”

As the center celebrates its 15th anniversary this year, ASU Now spoke with Carlson and a handful of the center’s leaders and affiliated faculty to reflect on where it’s been and get a sense of where it’s going.

When the center was founded, it identified two pillars of focus: conflict at the border of religion and the secular and the connection between religion and violence, as far as countering violent extremism and negotiating intergroup relations.

In the late 1990s, there was a growing sense that society was becoming more secular. Then 9/11 came, seemingly out of nowhere, and the entire world turned its attention to the role of religion in international affairs. 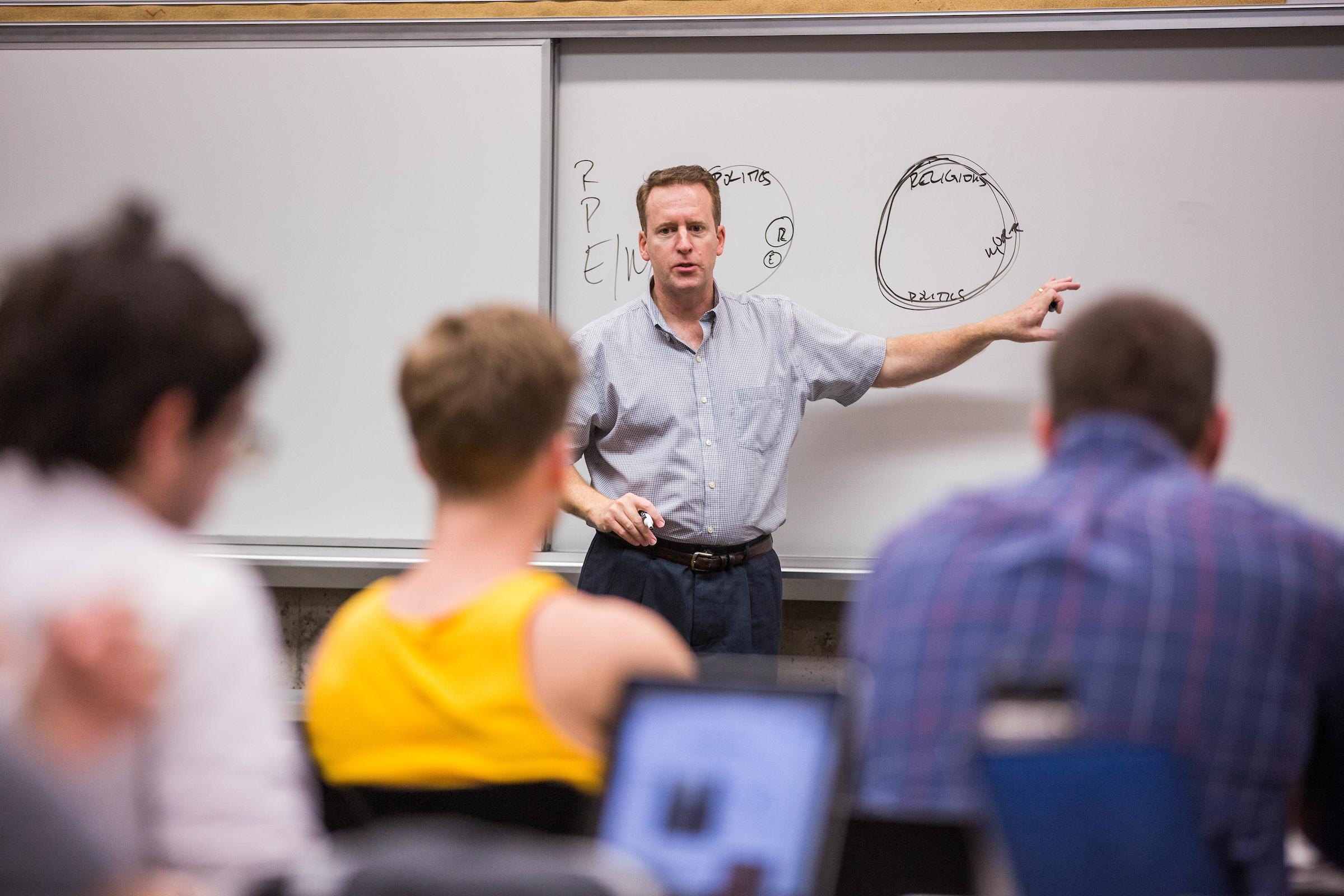 “What we study is how religion is or isn’t a part of the issues, contentions and controversies that are dominating headlines, and in what ways might religion be part of a response to those issues.”

During its first year of existence, the center held faculty seminars, hosted a series of public lectures to engage the community and initiated a seed grant concept to fund research projects.

Out of that came some of the center’s most notable projects, including the Transhumanist Imagination, which addresses questions about the interplay between religion, science and technology, and a pair of academic exchange programs between ASU and universities in Pakistan that seek to build peace through dialogue across cultures.

These projects prompted the addition of two final pillars: religion and science and technology; and peace studies.

The transhumanist project, Carlson said, asks, “How are we able to change what it means to be human — to live longer, to perfect our bodies, to perfect our minds — and what are the religious dimensions of that? How do we understand ourselves as human beings who are finite when we’re trying to escape our finitude?” Researchers at the center just submitted a proposal for a project in the same vein, called Beyond Secularization, to examine the idea that secular knowledge and spiritual belief must be segregated.

Yasmin Saikia joined the center as the Hardt-Nickachos Chair in Peace Studies in 2010. A co-investigator on two academic exchange programs for peace, Building Transdisciplinary Linkages and Globalizing Research and Teaching of American Literature, she believes that “religions don’t have conflict, people have conflict.”

“So people can also have peace,” she said. “And it’s very unusual for a public university to invest in peace studies. I give lots of credit to ASU for being a leader in that area.”

Right now, Saikia is focused on a large scholarly project called the People’s Peace Project, which was planned as a trilogy of books on the subject. The first book, “Women and Peace in the Islamic World,” published in 2015; the second, “People’s Peace,” which considers peace as it relates to the future of all humans, is currently in production; and the third, “Peace With the Other,” will consider how relations with marginalized groups might enable peace.

Saikia and colleagues are also applying for funding for projects that examine the experiences of war veterans and refugees.

“Peace is not something that is permanent,” she said. It is something humans must constantly work toward. “I think peace is a horizon that keeps us always aware of our failings but also of what we can achieve.”

More recent projects coming out of the center have reflected sea changes in global politics and culture. Religion and Global Citizenship is a multiyear initiative that explores the relationships between global citizenship and religious identities through workshops, seminars and research.

“I think very few anticipated quite the kind of shift that has gone on in the past few years,” said Cady, who directs the project with Carlson, referring to the rise in nationalist tendencies across the globe.

“So it couldn’t be more timely, when you think about the pushback against that orientation. But it doesn’t have to be either global citizenship or nationalism. There are ethical orientations within citizenship itself. I think democratic citizenship has responsibilities on local, national and global levels.”

School of Politics and Global Studies Professor Okechukwu Iheduru was recently granted funding as part of the project to conduct ethnographic case studies in West Africa in the hopes of identifying and analyzing the political consequences of recent social conflicts between Pentecostal churches and the state, and between these churches and other religious groups.

“You can narrow it down to the interaction between states and nonstate actors in shaping regional and global dynamics,” Iheduru explained. 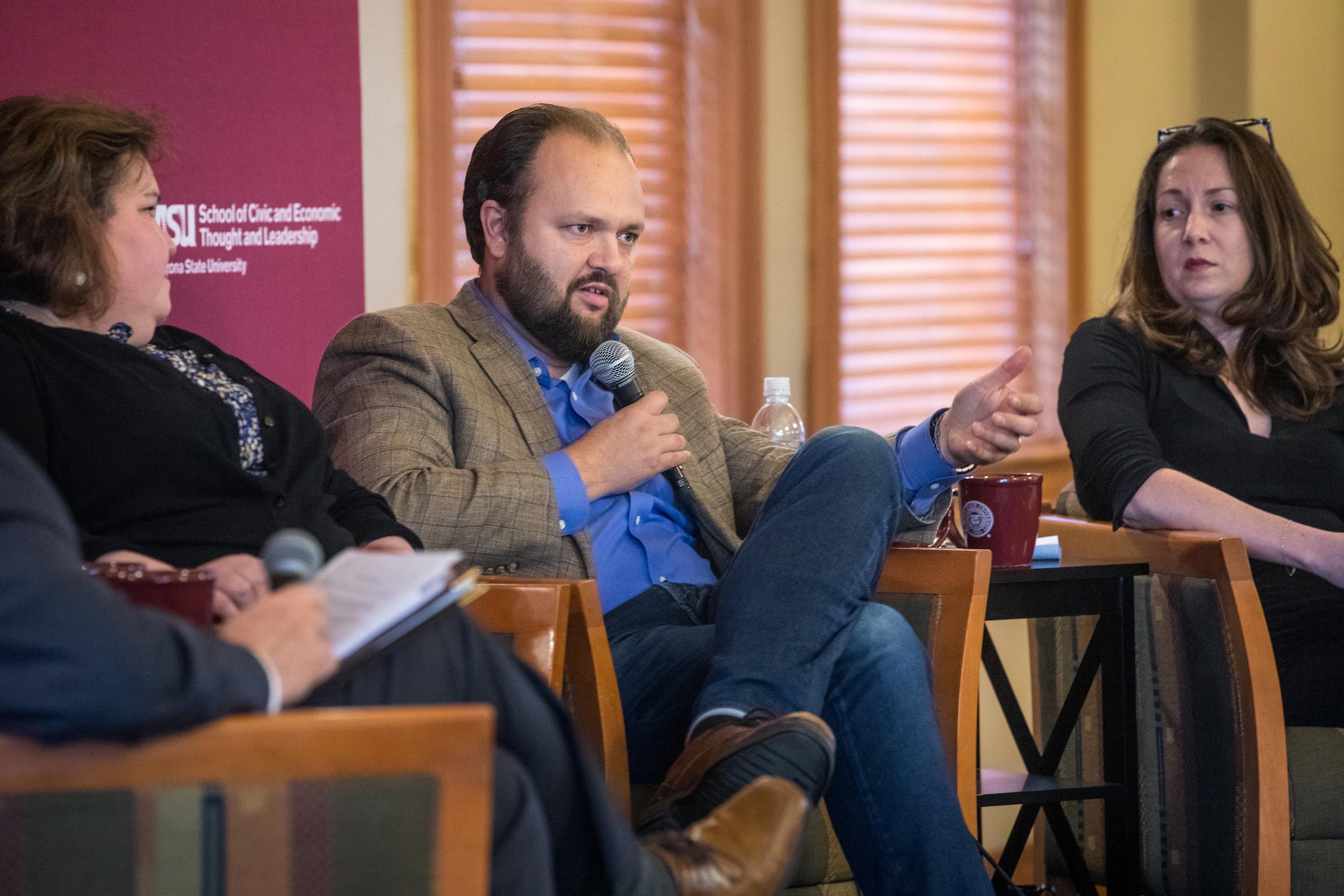 A native of Nigeria, Iheduru is grateful for the funding that will allow him to research what he called an “analytical black hole.”

“There has been a huge explosion of the Pentecostal religion in Africa but its role in reshaping regional identify formation has been neglected by scholars.

“On a more global scale,” he added, “the influence of religion on world politics and global affairs has grown significantly. In the past, religion was not considered an important issue because a modern society was supposed to be steering away from religion. But the reality is that religion has played a role in everything from regional integration in the European Union to the rise of violent, religious fundamentalist groups everywhere.”

This year, the center introduced the Religion, Journalism and Democracy initiative to address how scholars and journalists communicate those critical stories to the public.

Academia and journalism are “two vital institutions of democratic life,” Carlson said. “They are nongovernmental but they are deeply important to a thriving and flourishing democracy, and we’re seeing both of these institutions come under attack.”

Religion, Journalism and Democracy brings together journalists and religious scholars to exchange insights and expertise in a series of workshops, public talks and luncheons throughout the fall 2018 and spring 2019 semesters.

The success and popularity of such programs bodes well for the future of the center.

“The fact that there have been so many faculty for a number of years who want to participate in this kind of work, I think, is a reflection of how valuable it is,” Cady said. “So long as faculty feel it’s intellectually productive — and I think that has been the case — my hope is that it will continue to be sustained and grow.

“We’ve had some remarkably generous donors who have been enormously important in enabling the center to move forward, and I think the center has shown with its track record just how much it can accomplish with that kind of support.”