In July 1945, as the end of WWII approached, an electrical engineer named Vannevar Bush, who had overseen government research during the war, put forth a report at the request of then-President Franklin D. Roosevelt. The report made the case for continued federal support of civilian research, marking the beginning of modern science policy and serving as the precursor to the creation of the National Science Foundation in 1950.

This Thursday, the NSF will host its 70th anniversary symposium in celebration of its past accomplishments and future endeavors.

Last December, it was announced that Arizona State University’s Chief Research and Innovation Officer Sethuraman “Panch” Panchanathan had been nominated to serve as the foundation’s 15th director, succeeding current director France Cordova when her six-year term ends in 2020. G. Pascal Zachary, a professor of practice at ASU’s School for the Future of Innovation in Society, will deliver the opening speech at the symposium.

He called the event a “big deal for ASU,” and said, “it will look backward as well as forward, and I am providing some of the looking backward.”

As an affiliated faculty member of ASU’s Center for the Study of Religion and Conflict, Zachary is part of a group of researchers exploring how humans make sense of spirituality in an age of constantly evolving technoscience. Their project, titled “Beyond Secularization: A New Approach to Religion, Science and Technology,” was awarded a $1.7M grant from the Templeton Religion Trust in September.

ASU Now caught up with Zachary, who is the author of “Endless Frontier: Vannevar Bush, Engineer of the American Century,” to learn more about Bush’s enduring legacy and how today’s research landscape — including Zachary’s own involvement in the “Beyond Secularization” project — is affected by it.

Editor’s Note: Responses have been edited for length and clarity. 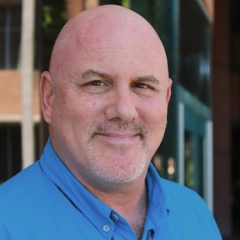 ASU School for the Future of Innovation in Society Professor of Practice G. Pascal Zachary

Question: How do Vannevar Bush’s beliefs align with ASU’s mission when it comes to research?

Answer: Because we’re at a university where the design of research and the organization of the pursuit of knowledge is taken very seriously by Dr. Crow, and because Bush’s area of scholarship is government leadership in science and technology, the history of this subject has some special relevance for ASU. More specifically, Bush conducted a report at the request of President Roosevelt in July of 1945 called “Science, the Endless Frontier,” wherein the frontier metaphor or rhetoric became exciting and central to the political rhetoric around supporting science with federal money in large amounts. And the rationale for government support of science has to do with how it can advance military and security, individual and public health and well-being and economic prosperity. One of the big achievements of WWII that Bush organized was the mass production of penicillin. Using the authority of the federal government and the emergency of war, he got a bunch of pharmaceutical companies to pool their efforts and suspend commercial interest and work together, and they did it. So that was an example of what could be done with government support of science. So anyone who looks at how to do this better or differently finds Bush and studies his thinking and his work.

Q: Are there any parallels we can draw or lessons we can learn when it comes to Bush’s insistence on the importance of scientists weighing in on policy and what’s going on in today’s political climate?

A: If you take today’s political environment, partisan interference in scientific research is a concern. People say you shouldn’t research abortion, or you shouldn’t research gun control or marijuana. These are some of the things the federal government has insisted upon, loosely speaking; there are some exceptions. But loosely speaking, you cannot study gun violence. Similarly, people aren’t allowed to study scheduled narcotics. So they aren’t going to get any funding if they want to study the potential health benefits of marijuana, for example. And we do see that under the Trump administration, some of the input of scientists at regulatory agencies has been done away with. Usually people depend on research to tell them if the water or the air is bad, and if you do away with that, you don’t know if the water or the air is bad. So there is a limited amount of partisanship already, but there’s some worry that there might be more.

Q: How does your research with the Center for the Study of Religion and Conflict relate to this?

A: One of the questions we are asking is: If we can target technological innovations to advance certain capabilities, such as defense or health care, can we not do the same with spiritual and religious aspirations and boundaries? You might say, crudely, “I’d like to have a Buddhist computer,” or “Wouldn’t it be nice to have a Christian Facebook?” Or, “Could I have a Jewish skateboard?” What would that even mean? Some of my colleagues have called this “humane technology,” meaning something more uplifting and high-minded. So you might say, “Why would I be interested in religious, spiritual sources of inspiration for shaping the technological agenda of scientific research?”

Surprisingly, there are many scientists and people in digital industries who say that they are already doing this, designing computers to amplify their sense of wonder and mystery in the world, to enhance their cognition in a way that mind expanding drugs might do it. There are people who make claims about computing and the internet that suggest that some kind of collective consciousness might emerge from the internet. One of Google’s founders said that Google is the mind of God. What does it mean to make a claim like that? To me, what it means is injecting directly religious, spiritual concerns and values into discussions and thinking about science and technology in ways that generally have not been done because of what we might think of as the border between science and religion. That scientists said (to religion), “You leave us alone and we’ll leave you alone.” And I think that my colleague Hava (Samuelson) would say that has been broken down; that people don’t want this kind of wall between the two anymore. So these are some of the things we’re kind of parsing.