In July, the National Endowment for the Humanities announced it was awarding $30 million in grants to support 238 humanities projects nationwide. Among these projects are two initiatives from Arizona State University faculty within The College of Liberal Arts and Sciences.

Professor Yasmin Saikia and Associate Professor Chad Haines, a husband-and-wife duo in the School of Historical, Philosophical and Religious Studies, are leading one of the funded projects to highlight groups in South Asia who are marginalized because of their religious beliefs and cultural backgrounds. Saikia and Haines were awarded $249,952 toward the project "Unfinished Partitions in South Asia and the Making of Miyahs, Biharis, and Christians into Noncitizens."

The couple came to ASU 10 years ago, when Saikia was named the first Hardt-Nickachos Chair in Peace Studies at ASU’s Center for the Study of Religion and Conflict. While at ASU, the couple discovered many opportunities to collaborate in their work like never before. Saikia’s work focuses on combining history with peace in the context of the histories of premodern and contemporary South Asia, while Haines’ work looks at contemporary issues in Pakistan and the Muslim world from a cultural anthropological perspective.

As they continued to find intersections in their work, they developed "Unfinished Partitions in South Asia and the Making of Miyahs, Biharis, and Christians into Noncitizens" as a way to tell the stories of these communities while highlighting their enduring humanity and engaging the larger academic discussions around vulnerable communities, citizenship and belonging in the postcolonial context of partitioned lives.

“This project is part of an ongoing study that I came to as a historian when I started asking the questions, ‘How do you write history without a map?’ and ‘If we were to take up these lines of boundaries on maps that divide up people — what kind of story can we write about that region called South Asia?’” Saikia said.

“For me, these questions have become very urgent. When you take those borders out, you actually start seeing how challenging the lives of people on the ground are. The states that promised them freedom, dignity and rights have not delivered on this. This is not to castigate anyone, but to make it evident that there's a lot of work to be done for people to be truly free in the region.” 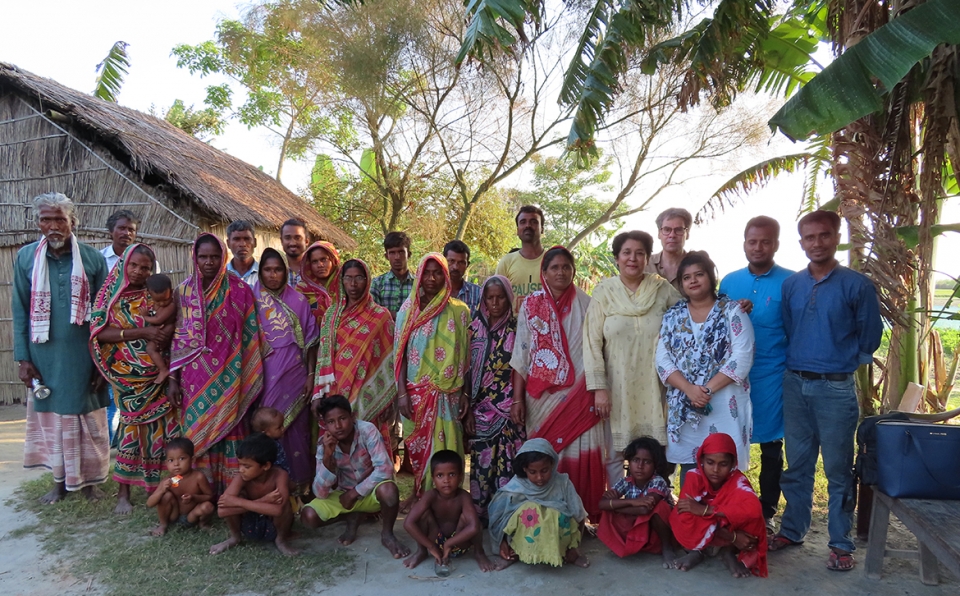 Yasmin Saikia and Chad Haines on a trip to a Miyah village in Assam, India, in October 2019.

Their work will interweave humanistic research methods including archival research, oral histories, field observations and ethnographic research to gather firsthand accounts of precarious communities in South Asia. The grant will enable them to travel to India, Pakistan and Bangladesh, complete research and write a co-authored book on their findings.

“It’s an honor to receive a NEH grant, especially because it's our first time applying for any collaborative research project together,” Haines said. “The award gives validation for the topic and what's happening to communities around the world. What we're looking at is not unique to South Asia — this idea is dominant here in the U.S., across Europe and around the world. So it's just a huge boost both practically as far as having the funds to be able to do this work, but it also comes with great honor professionally.”

Robert is a trained philosopher of biology and bioethicist, and has been with ASU since 2004. His teaching and research focuses on the justification of controversial research, most recently in neurosciences and bioengineering. Our SHARED Future will be a four-week summer institute held in summer 2021 for humanities professors that will focus on building capacity to teach and do humanities with impact on emerging developments in bioengineering. Jason Robert speaking at an event in 2018.

“Typically, when people talk about the need to integrate the humanities with science, technology engineering, and mathematics (STEM), they focus on integrating the humanities into STEM,” Robert said. “In our institute, we will flip the dynamic by integrating STEM into the humanities, and we will do so in a way that helps to realize the ambition of a genuine liberal arts education for the 21st century. Given the current and future potential of bioengineering to impact domains far beyond the laboratory, it is imperative that we all have the resources to participate in well-informed, critically engaged discourse and deliberation about the direction of bioengineering research.”

The institute, which will run in collaboration with the Lincoln Center for Applied Ethics, will be geared toward humanists who interface with a breadth of students across general education curriculum and more in-depth topical courses, and strive to make their teaching examples timely and relevant to issues their students will be faced with. Robert said the institute wouldn’t be possible without the support of the NEH.

“It’s always an honor to have one’s work appreciated by our peers. What’s especially rewarding in this case is that, although I am trained as and work as a humanist, this identity is sometimes overlooked by colleagues outside of ASU simply because I am a professor of life sciences,” Robert said. “The NEH was able to see past this and recognize that — despite my title and the institute’s focus on STEM — the institute is for humanists by humanists.”

“These NEH grants enable these incredibly valuable, innovative and transformative projects to move forward and make positive change in our community and in the world,” said Jeffrey Cohen, dean of humanities at The College. “We are extremely proud of Chad, Jason and Yasmin for this major accomplishment, and we look forward to watching these projects come to life.”